An Informative and Inspirational Speaker

Curt Weeden is among the nation's most sought-after speakers on philanthropy and social responsibility issues and trends. The author and business executive mixes humor, personal experience and data-based facts to map out ways nonprofits can generate more revenue—and to help businesses get a stronger return on investment from their charitable donations.

Whether at large annual meetings or closed-door executive retreats, Curt's appearances consistently win the highest possible marks. His messages are more than motivational and inspirational; they leave behind practical, do-able strategies designed to generate more resources for nonprofits and maximize profit potential for businesses.

See the contact information page to get in touch regarding Curt's speaking schedule and booking requirements. 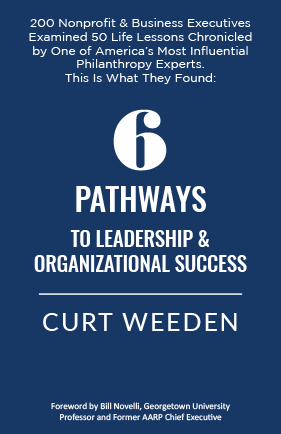 A Popular and Provocative Writer

The Sorcerer of WIZ is a captivating update of the beloved Wizard of Oz. This engaging tale for six- to twelve-year-olds couples a modernized classic with character-building life lessons.

Dutch Island is a novel based on the true story of a small deserted island near Newport, Rhode Island. Once an important trading center and military outpost, the island was at one time partially owned by Weeden's Revolutionary War ancestors.

Book of Nathan was coauthored with publishing executive Richard Marek. The novel is wrapped around contemporary social issues and characters plucked out of the business world and nonprofit field. "A wild ride!" is how Publishers Weekly sums up the very popular comedic mystery.

Smart Giving Is Good Business is considered Weeden's most important book. It outlines a plan aimed at reversing a decades-long slide in corporate philanthropy. Often referred to as the "$8 billion book," Smart Giving maps out a plan to increase business cash donations by 50% over current contribution levels.

Corporate Social Investing (with introductions by the late Paul Newman and investment guru Peter Lynch) remains one of the most successful books on corporate social investing. "It will change the way you think," said Vernon Jordan, former head of the National Urban League.

How Women Can Beat Terrorism calls on women to play a more prominent role in preventing terrorism. Joan Ganz Coney, the cofounder of Sesame Street Workshop, calls the book "a powerful argument on behalf of equality, opportunity and education for women."