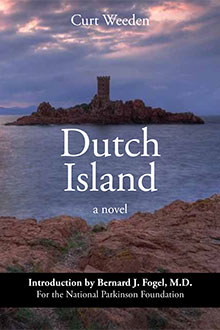 When New Jersey's Rick Bullock witnesses a horrific murder, his to-die-for New England vacation is over. Bullock gets tagged as a person of interest in the decapitation of a prominent land developer. Finding the real killer or killers is Bullock's only stay-out-of-jail card—but playing it means going head-to-head with not only one of the richest Arabs in the world but also the East Coast's organized crime kingpin.

With a band of oddball characters at his side, Bullock goes on the hunt for an eighteenth century land deed that could cripple plans for the construction of a controversial mosque on Dutch Island—an eighty-acre patch of land in the middle of Rhode Island's Narragansett Bay. The search leads Bullock and company into risky territory where danger and death lurk at every turn.

When Bullock manages to track down the elusive deed, he meets its owners, an inspirational Parkinson's patient and his equally extraordinary wife. The couple's gutsy determination and bravery are put to the test in a violent showdown on the shores of Dutch Island.

"...never been such a fun and entertaining story."
— James R. Clifford (Ten Days to Madness)