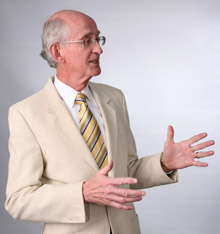 Curt Weeden is recognized as one of the nation's leading experts in the philanthropy and social responsibility fields. He speaks frequently to nonprofit and business audiences on philanthropy trends and how business-nonprofit alliances can generate social change while also addressing private sector interests.

Weeden founded the Georgetown University New Strategies Program—the widely recognized national initiative that provides nonprofit executives with new ways to generate revenue for their organizations. Over 1,000 nonprofit executives have been through New Strategies, making it one of the most influential advanced management offerings of its kind. Weeden launched the program in 2011.

Weeden is the author of seven books. 6 Pathways to Leadership and Organizational Success (Quadrafoil Press) pinpoints 50 principles, beliefs and behaviors important to effective managers and organization - then, with the help of 200 nonprofit and business executives - the book singles out the most important six pathways leading to success. The Sorcerer of WIZ updates The Wizard of OZ with contemporary social issues, making this children's book a favorite among adults. His two novels Dutch Island and Book of Nathan have received wide acclaim (Weeden donates all proceeds from print copies of Dutch Island to the National Parkinson Foundation). Smart Giving Is Good Business (Wiley) and Corporate Social Investing (published by Berrett-Koehler with introductions by the late Paul Newman and investment guru Peter Lynch) are the nation's top two books on how to give and get corporate contributions. How Women Can Beat Terrorism (Quadrafoil Press) is used widely as an international policy and women's study reference book.

Weeden is also president of Business & Nonprofit Strategies, Inc., a consulting group providing management guidance to some of the nation's largest corporations and not-for-profit organizations.

Weeden founded and served as chief executive of the Association of Corporate Citizenship Professionals (ACCP), the national association representing corporate contributions, community relations and employee volunteer managers from over 220 companies. Member companies are responsible for much of the nation's corporate cash and product contributions.

In 1999, Weeden launched the Contributions Academy, which became the principal management education resource for corporate grant makers in the U.S. and in many countries abroad. The Academy became part of ACCP in July 2005.

Prior to launching the Academy, Weeden served as vice president for Johnson & Johnson and managed that corporation's $150 million contributions program. Before joining J&J, he headed a consulting firm that provided external relations and merger/acquisition services to several of the nation's largest businesses including Bank of America, General Motors, Merck, Novartis, Xerox and numerous other businesses.

Weeden and his wife live in Mount Pleasant, South Carolina.

"For a man whose motto was 'the man who dies thus rich dies disgraced,' Andrew Carnegie might tell today's executives that they should embark on a fortune-dispensing journey."
From "What Would Carnegie Do About Corporate Pay, Charity?" by Curt Weeden, USAToday
"The litmus test for any corporate social investment—regardless of whether a business elects to write it off as a charitable deduction or any other kind of business expense—is that it must return value back to both the business and society."
From "Business-Nonprofit Partners vs. 'Tin Cup' Philanthropy" by Curt Weeden, Washington Business Journal
"Corporate social investing is a way to turn the tide, a way to stimulate win-win business and nonprofit partnerships."
From "Corporate Social Investing" by Curt Weeden, The Journal of Commerce
"When companies forsake their broadly defined social responsibilities or use spin to construct a deliberately overinflated image of their corporate citizenship, the end result is a private sector and a civil society out of balance."
From "Corporate Social Irresponsibility" by Curt Weeden and Leo Hindrey, Jr., BusinessWeek